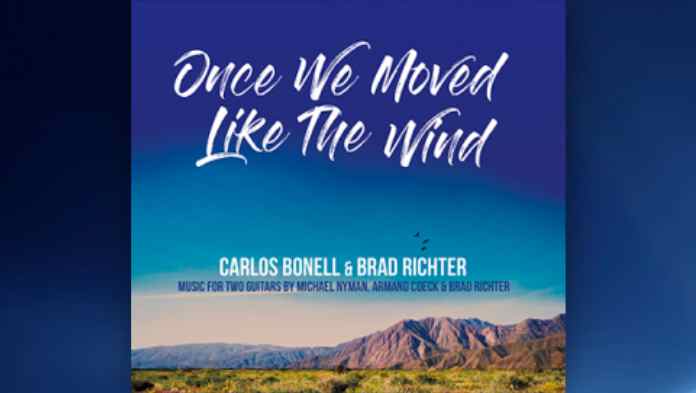 Once We Moved Like The Wind – Remembering Geronimo
Published: 14 June, 2018

The new album from Carlos Bonell and Brad Richter

Geronimo, the great Apache leader, on finally being captured and imprisoned by the US army said “once we moved like the wind”. This has inspired Brad to compose an extended work partly based on Apache rhythms and music. It is scored in 3 movements for 4 guitars. The music includes not just guitar playing but also foot stamping and whistling in imitation of the wind blowing. The music is impressionistic and descriptive of the dramatic events around the escape of Geronimo and his tribe from captivity.

The album also contains the première guitar recording of Carlos’s arrangement of music from Michael Nyman’s The Piano, which maybe surprisingly – given that it is called The Piano – sounds good on 2 guitars!

The Belgian composer and guitarist Armand Coeck has written extensively for the guitar, including a handful of duets. His music is deeply felt and spiritual, and complements this album dedicated mostly to the first recording of some wonderful music.

Brad met Carlos when he came to study at the Royal College of Music in London, after which they struck up a friendship and partnership which led to a creative collaboration and concert tours. Brad is the founder and director of the Lead Guitar programme in the USA which is dedicated to devising and furthering educational projects involving the guitar for disadvantaged communities. 25% of proceeds from the sale of this CD will benefit Lead Guitar programmes that serve the Apache, Navajo and Tohono O’odham Nations in Arizona, USA.