I am still alive and well and at the moment in…er, where am I?

Oh yes, just arrived in Mexico – again. Before that I was in and near Barcelona. I visited guitar maker Arcadio Marín’s workshop in the depths of the countryside, but actually only a few miles from the big city. I never knew it could be so quiet. I thought I would half continue with my radio silence of the past few weeks by letting these pictures speak for themselves. 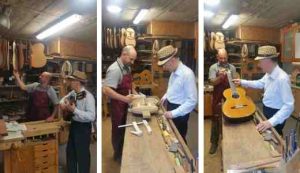 “Yes” said Arcadio, “the neck’s fine but my eye hurts from squinting.”

The next day I ventured into Barcelona itself for a quite different guitar experience. Amalia Ramirez was bestowing a José Ramirez guitar to the collection at the Museu de la Música. I was lucky enough to have been asked to play a brief concert to an invited audience on the very same instrument. Immediately on termination of my performance the guitar was locked away into its glass case, whence it will venture forth from time to time to be aired and played, I am glad to say. 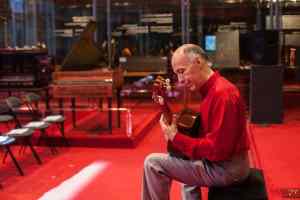 18th June – Barcelona, Museu de la Música. Trying out the hall before the audience rushes in

Next stop: Queretaro, a beautiful city in the depths of Mexico. I am playing there on Sunday. Watch this space for my impressions, with a pic or two thrown in for good measure.